My name is Polly. I am ten. I am a schoolgirl. I go to school. I like learning English and playing puzzles. I would like to tell you about my family. It is neither big nor small. There are four of us.

I have got a mother. Her name is Jane. She is a teacher. She is very responsible and creative. She likes her work. Her hobbies are singing and shopping. My mother is fond of reading detective stories.

I have got a father. His name is Jack.  He is a doctor. He is clever and hardworking. My father likes playing golf. He goes in for sport to be healthy and strong. He is fond of fishing too.

My brother Nick is small. He is only four. He likes playing toys. Usually we get on well with him, but sometimes he is very naughty.

On Saturdays and Sundays we like to be together. Last Sunday we went to the country. We had a good rest.

My name is Kate. My family is a typical Russian family. There are four of us. I have got a mother. Her name is Ann. She is a teacher. She is very kind. Her hobbies are singing and shopping. My mother is fond of reading detective stories.

My father`s name is Peter.

He is a driver. He is clever and sporty. My father is fond of fishing. My brother Nick is small. He is only four. He likes playing with his toys.

We are a close and friendly family. We like to spend time and holidays together.

Tomorrow it will be my mother’s birthday. My brother and I will go shopping together with our father. We are going to buy our mum a birthday present. It will be a nice scarf. She would like to have a white one. And we shall buy flowers for her, too.

Tomorrow my brother and I will clean the flat. We won’t be lazy. Father will help us. Then we’ll make our kitchen clean and bright. Tomorrow we will lay the table. We would like our mother to be happy.

3. Do you think Kate’s family is friendly? Why?

The man and the monkeys.

One day a man who made caps went to the market to sell them. It was a long way to go. The man passed  by a long river. When he was in the forest, he decided to rest a little, as the day was very hot and he was very tired.

The man saw a large tree. He decided to rest under it.

As the sun was very hot, the man put on one of the caps on his head and put all the other caps on the ground under the tree. The man had lunch, then lay down and soon was asleep. When he woke up, he could not find the caps. 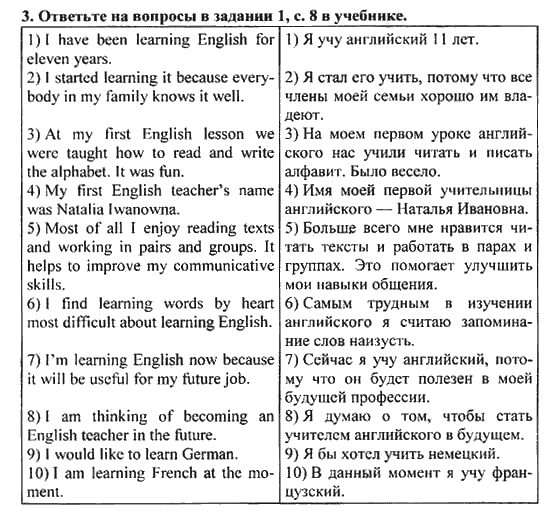 “Where are my caps?” he cried. He could not find them anywhere.

Suddenly he looked up. And what did he see? He saw many monkeys in the tree, and each monkey had the man’s cap on its head!

“Give me back my caps!” cried the man. But the monkeys could not understand the man. They laughed, jumped and played with the caps.

The man asked and asked the monkeys to give him back his caps, but the monkeys didn’t understand him. They only laughed.

The man got very much angry with the monkeys. He took off his cap, threw it on the ground and cried: “If you want my caps, you may take this one, too!”

And do you know what the monkeys did? They took off the caps and threw them on the ground!

That’s how the man got back all his caps.

Certainly, he was very glad. He quickly took all his caps and went away.

6. Each monkey had the cap on its head.

7. The monkeys understood him well.

8. The man went away without his caps.

The Bear in School

One day a boy found a brown bear-cub in the forest. He was very little and looked like a puppy. The boy carried him home.

Every day the boy went to school. The bear-cub went with him and waited for the boy in the field.

At first the other boys were afraid of the bear-cub, but soon they became great friends. Many of them brought food to school and gave the bear-cub some bread and butter. 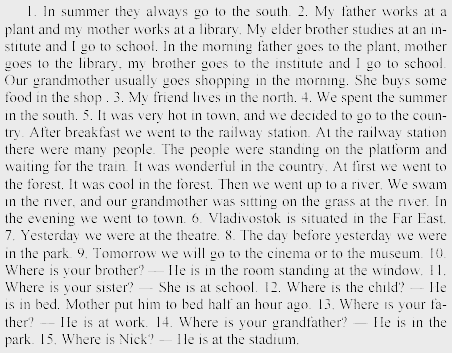 The bear-cub lived with the boy for a long time. But one day he went to the forest and did not come back. Everybody was very sorry for the bear-cub.

Many years passed. New schoolboys came to the old school. One very cold winter day the door opened, and a large brown bear walked into the classroom.  The boys were afraid. Some ran to the door, others jumped out of the window.

But the bear did not touch the pupils. He walked up to the fire and warmed himself. He felt quite at home. He was very glad to get into such a warm room. He sat by the fire, and then walked up to the table and ate some bread. Then the bear walked out of the house.

Some young men of the village came with their guns to kill the bear. They soon found him but did not kill him. They saw some marks on his skin and understood that the bear was the old friend of their schooldays. They let him go back into the forest. 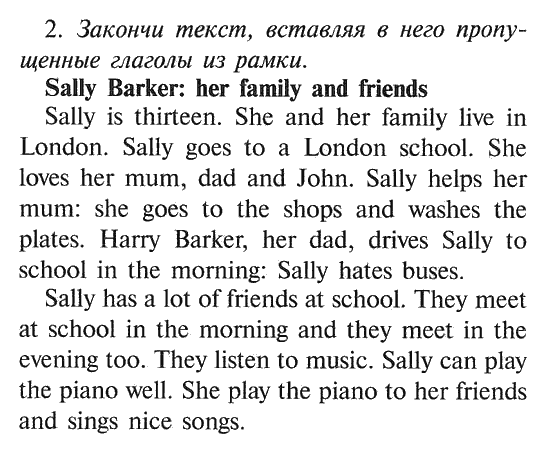 3. Did the young man kill the bear? Why?

A Day in the Life of Simon Carrot

First of all, I must tell you about myself. I am thirteen and I am in the third class at a Grammar school in Manchester

What a terrible day! I woke up late and didn’t have time to eat my breakfast. 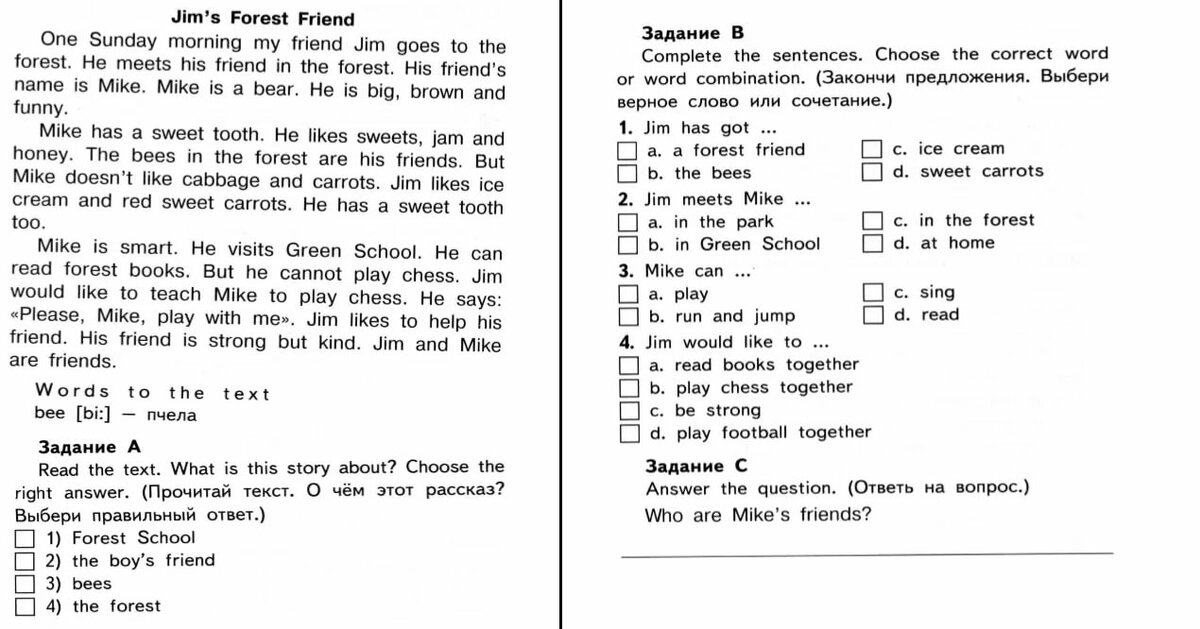 I couldn’t find my books or my school cap. At last I found my books in the bathroom; and at last, I found my cap — my dog was playing with it! I was nearly late for school.

The first lesson on Monday morning is maths. What a terrible way to start the week! Mr Green, the maths teacher, took our homework. He saw that my exercise — book was dirty. He was very angry and gave me a bad mark for it.

Then he gave us some tasks to do. I sat next to Jane, who was  fat and not very pleasant — but very good at maths. I asked her to tell me the answers, but she didn`t want.

The next lesson was French. I like French. It’s nice to be able to talk to somebody in another language.

At last, it was eleven o’clock: time for break. Nell gave me a piece of cake to eat with my milk. She also gave me her Latin homework to copy. I think she likes me and she’s a nice girl.

After break, we had two lessons of  Latin! They are bad: I hate Latin!

Mr Williams punished me for talking to Nell. 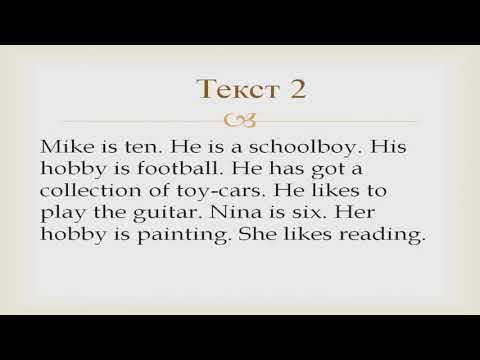 2. He goes to a Grammar school in London.

3. He woke up late and didn’t eat his breakfast.

4. The first lesson on Monday morning is maths.

5. Jane is very good at French.

6. Simon ate a piece of cake with milk.

7. Nell gave him her English homework to copy.

A Day in the Life of Simon Carrot

At 12: 30 pm was time for lunch. I was very hungry! I sat down at the table feeling very happy because the Latin lessons were over. And then I saw what was for lunch: meat pie, boiled potatoes and cabbage. I hate vegetables! But I ate a little, because I was so hungry.

Then I went into the playground with my friends Pete Sharp and John Ford and we played football.

After lunch we had a history lesson. I don’t usually like history, but I liked this lesson very much. We learned about the Battle of Hastings in 1066. We were on holiday in Hastings last summer. I said I would bring some photographs of our holiday to school the next week.

At three o’clock it was time for my favourite lesson of the week: games. We played a very exciting game of football but it ended in a draw.

After school at four o’clock, Pete and I bought some sweets and I went to his house to listen to music.

Mum was angry because I didn’t arrive home till half past seven. She doesn`t like when I come home late. My supper was cold.

I did my French homework but I didn’t do my history homework. There was an interesting programme on television.

5. At two o’clock was his favourite lesson.

6. They played a very exciting game of cricket.

8. He did his math homework. 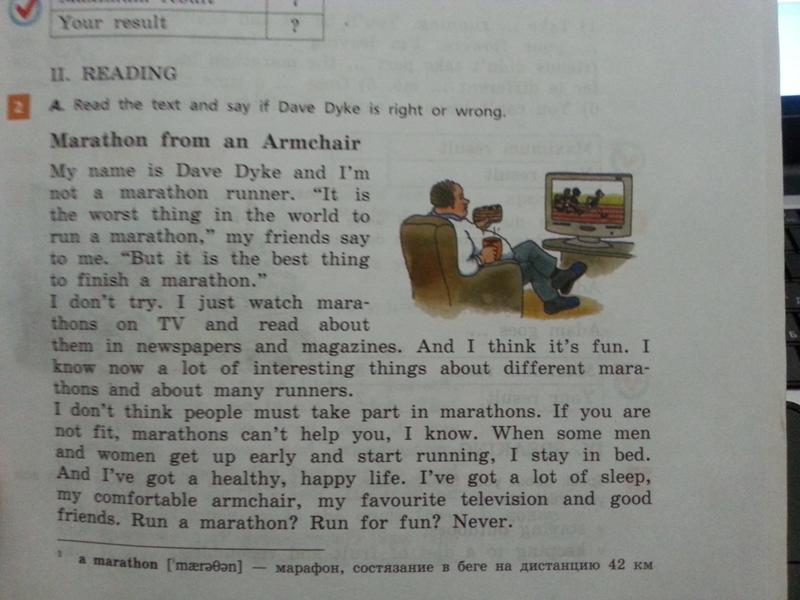 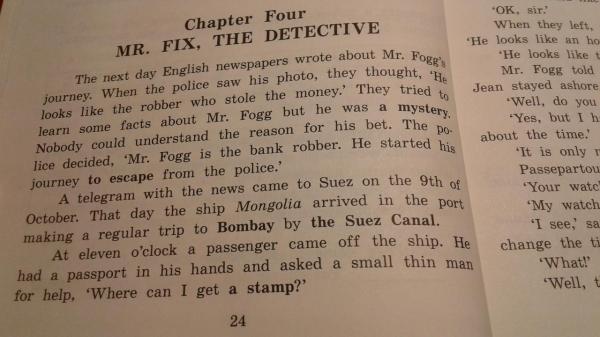 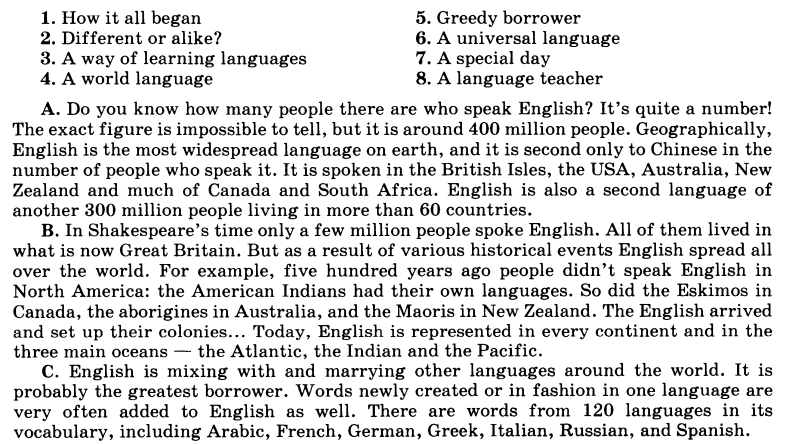 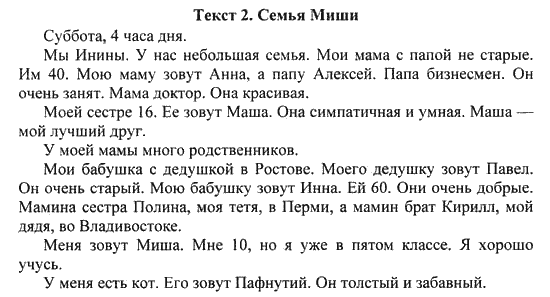 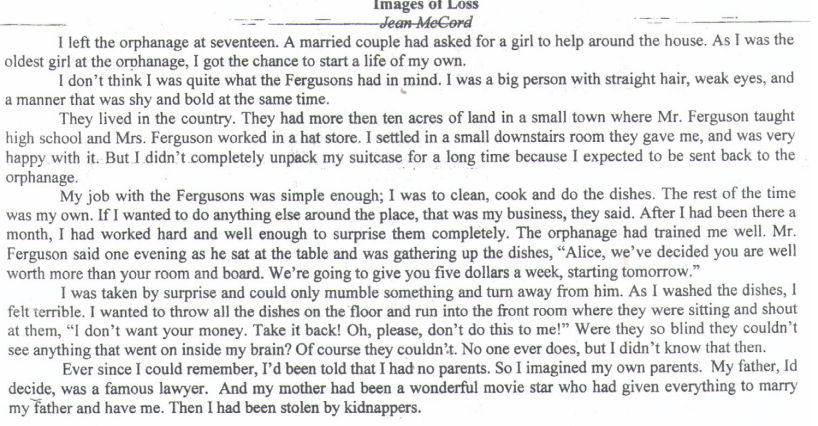 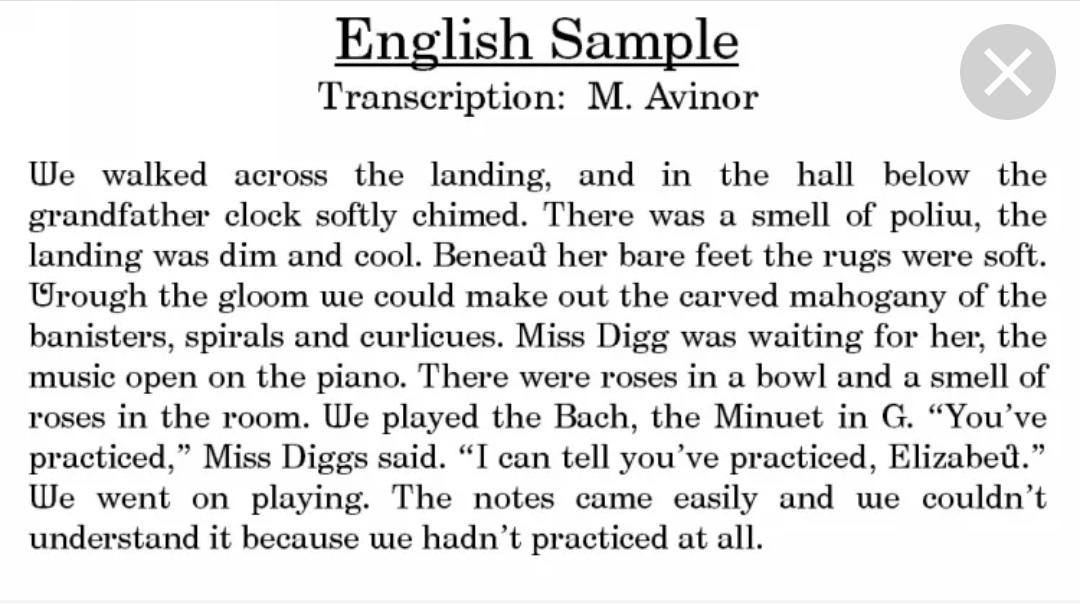 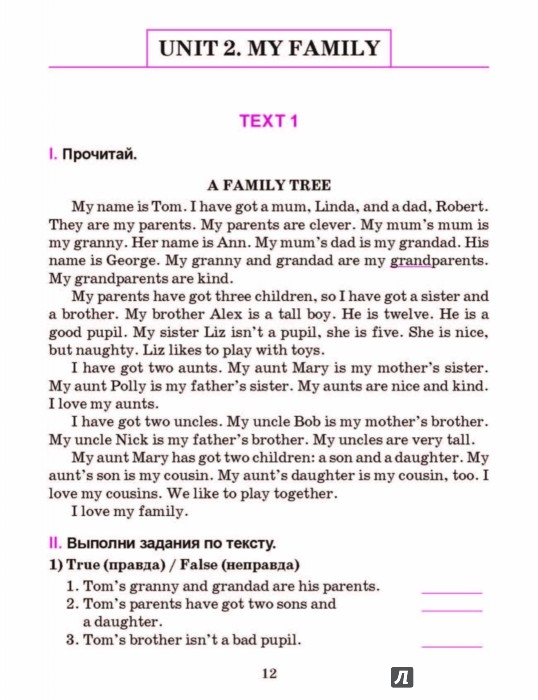 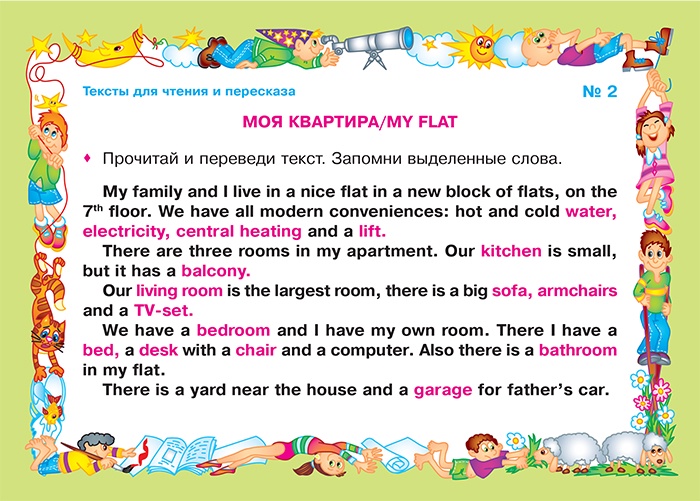 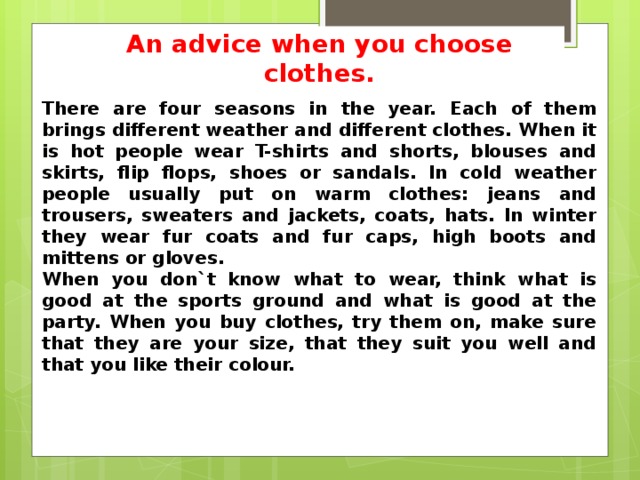 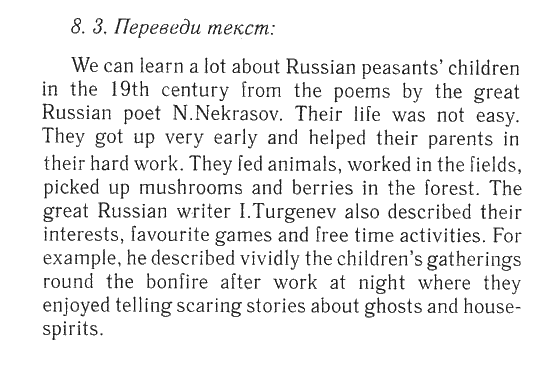 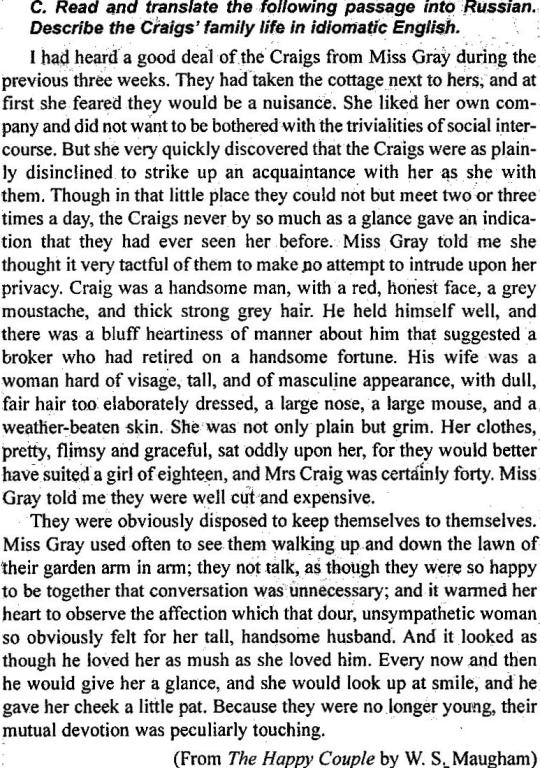 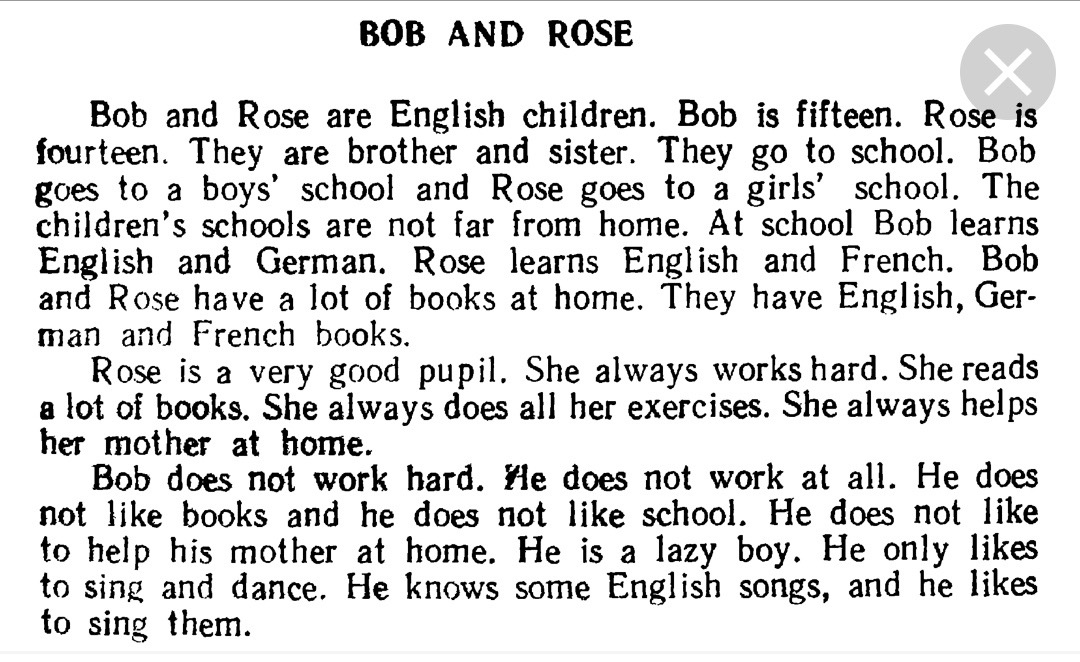